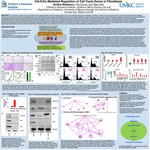 CT10 regulator of kinase (Crk) and Crk-like (CrkL) are cytosolic adaptor proteins that play important roles in cell proliferation, adhesion, and migration. In addition, Crk and CrkL are structurally similar to each other and play essential overlapping functions. Crk and CrkL are also known to be overexpressed in non-small cell lung cancer, ovarian, gastric and glioblastoma cancers and have been suggested as novel therapeutic targets for cancer treatment. Ablation of endogenous Crk and CrkL from cultured fibroblasts carrying floxed alleles of Crk and CrkL by transfecting with synthetic Cre mRNA resulted in a failure of cell proliferation and cell cycle arrest at the G1-S transition. To elucidate the mechanism of Crk/CrkL-mediated functions, we performed custom RT2 profiler PCR arrays after conditionally ablating both Crk and CrkL from fibroblasts. Loss of Crk and CrkL led to significant changes in expression levels of cell cycle genes such as cyclin D1. In addition, non-coding RNAs such as miR-1a-3p, miR-23b-3p, miR-99a-5p, and miR-335-5p, which are known to reduce cell proliferation and tumor metastasis, were up-regulated in the absence of Crk and CrkL. Changes in the expression levels of miR-335-5p and cyclin D1 were confirmed by q-PCR and Western, respectively. Additionally, Western blot analyses showed that loss of Crk/CrkL from cells increased the expression of p27Kip1. Reintroduction of CrkII restored the cyclin D1 expression and repressed the p27Kip1 expression. Our results suggest that Crk and CrkL control the cell cycle by regulating gene expression of cyclin D1, p27Kip1 and miR-335-5p. With these results, we are extending our study to cancer models to gain clear knowledge on biological functions of Crk/CrkL in cancer.