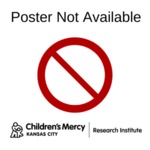 Introduction: Pre-mature radial physeal closure is a relatively rare occurrence in children. When isolated growth arrest of the radius with continued ulnar growth occurs, the resulting ulnar positive deformity leads to altered wrist mechanics and pain. Timely epiphysiodesis of the distal ulna with and without ulnar-shortening osteotomy can address these issues, but continued ulnar overgrowth is a possible complication. We seek to evaluate the success rate of the primary epiphysiodesis of the ulna and associated clinical outcomes.

Materials & Methods: A chart review was conducted at two children’s hospitals from 2008 to 2019. Patients between the ages of 6 and 18 years old, with pre-mature distal radius physeal closure, with or without positive ulnar variance, and greater than two months follow up were included. We evaluated the following characteristics for each patient: demographics, initial cause of premature radial physeal closure, ulnar variance, additional procedures performed during epiphysiodesis, pre- and post-operative pain, range of motion, instability. Summary statistics were conducted and expressed as proportions, medians and means. A paired t-test evaluated change in ulnar variance for those who had an ulnar shortening osteotomy performed.

Results: Thirty-one patients were identified, and the median age at the time of surgery was 12.2 years (IQR: 3.4). Ulnar shortening osteotomies were performed in 53.1% of cases and distal radius osteotomy in 15.6%. Bone graft was utilized in 25.81% of the epiphysiodesis procedures. There were two failures of primary epiphysiodesis indicating an index success rate of 93.7%. The average combined ulnar variance correction was 4.30 mm (95%CI: 3.17, 5.43). The mean physeal time to closure was 134 days. Pre-operative symptoms were resolved for 90.6% cases at final follow up.

Conclusion: Ulnar epiphysiodesis successfully terminates ulnar physeal growth in 93.7% of cases. Pre-operative symptoms were completely resolved with a median physeal closure of just over 4 months. Ulnar variance was corrected on average by 4.30 millimeters when a radial or ulnar shortening osteotomy was performed at the time of epiphysiodesis.