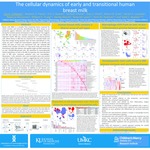 The Cellular Dynamics Of Early And Transitional Human Breast Milk

Breast milk (BM) is a complex fluid containing factors essential for infant nutrition and immunity. Breastfeeding has been shown to be protective against infections and other immune-mediated diseases during the lacation period and beyond in later childhood. This suggests that BM also imprints the neonatal immune system and influences long-term health. BM also contains populations of maternal-derived cells. Which factors in BM that are important for neonatal health and how they change during lactation have not been well-defined. In this study, we used a single-cell transcriptomic approach to identify and define cell types of early and transitional milk. We collected BM samples from mothers of infants 2-7 days (early milk) and 8-16 days (transitional milk) after delivery. We applied single-cell RNA sequencing on over 154,000 BM-derived cells. We identified 25 transcripionally distinct populations of cells in the BM. As expected, the most abundant cells in BM were mammary epithelial cells and macrophages. Monocytes, T cells, dendritic cells, and neutrophils were also present and had a higher frequency in week 2, suggesting that some immune cells may remain abundant in the early days of lactation and slowly decline as milk matures. We also detected a small number of stem and progenitor, natural killer and B cells in the BM at a higher frequency in week 1. This work provides an atlas of the cellular component in human milk at two timepoints of lactation. In addition to cell identity and frequencies, we have also uncovered unique molecular pathways that are activated in BM cells. This work will lay the foundation for future studies of how these cells influence neonatal health.